The HP Way of applied to start-ups, 50 years later

My long time at HP has been immensely rewarding but it is time to say goodbye. I had the chance of working alongside many smart and dedicated people, from employees in field offices, engineers in product divisions and scientists at HP Labs . I am proud I help launch at least 6 new businesses that impacted positively the lives of millions. These ranged from geographic expansion in Africa, Europe and Middle-East, developping healthcare, clinical information or telemedicine systems, helping to deploy the first mobile networks and support broadband telecommunication services and in recent years piloting mobile multimedia applications. In recent months I had the chance to meet again former colleagues around the world from all these periods and it is great to reflect on our team contributions. 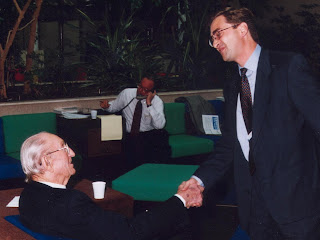 So, why do I leave ? The answer is that it is for the same reasons I joined and stayed on despite two other career temptations : passion for new ideas and great people. Now, I believe that experience of the HP Way will apply even better to technology start-ups than it can to corporate multinationals. The HP Way was formulated by David Packard in 1957 . He summarized it in an exchange we had the last time we met in 1995 in Geneva :

It was just another practice of the HP Waythat Dave described in his book published the same year. The following quotes are very relevant 50 years later and remain benchmarks for young entrepreneurs :

...an egalitarian, decentralized system that came to be known as 'the HP Way.' The essence of the idea, radical at the time, was that employees' brainpower was the company's most important resource....

... nothing has contributed more than the policy of management by objective. MBO is the antithesis of management by control .... it refers to a system in which overall objectives are stated and agreed upon, and which gives people the flexibility to work in ways they determine best for their own areas or responsibility. It is the philosophy of decentralization in management and the very essence of free enterprise.

In more detail, the HP Way included the following 7 corporate objectives
I noted earlier my thoughts on Bill Hewlett’s approach to product innovation in a 2008 blog and history details are posted here. There is also a lot to learn from HP's founders bottom-up engineering approach. Not always 1st to market with an idea, but definitely adding added value in price/performance or usability. To discuss this, I intend to invite Chuck House, an HP alumni from these early day to present his new book in my region of Switzerland. And I can't help recall that Steve Jobs and Steve Wozniak among others were HP alumni, who learned from these principles and expanded beyond.

So with these lessons from the past, I look forward to my next big thing, a meaningful entrepreneurial activity helping start-ups in Switzerland, on EPFL and beyond as business angel investor and interim management. And I will keep one foot in the mobile communications world as part of my support to Mobile Monday Switzerland.

Surfing on mobile web at MWC2010
One more time I attended the mobile industry annual party. It's been over a decade by now, good time to measure the change since 2000 - most of the promises have been held : subscribers grew 10X, smart phones exceed 50% of shipments, bandwidth is finally there with 3G bundles and first LTE deployments live, mobile web nearly ubiquitous (Ovum estimates : 95% of traffic is data, 60% of which HSPA). Not everybody in the industry was partying tough : Google has entered the game, opening the show while Nokia and HP were quietly exited the main exhibition to organize side parties. Overall, business and climate was cold and rainy in Barcelona this year. In summary :

Money and innovation is moving to applications.
Cloud and web players dominate the battlefield.

Money and innovation is moving to applications.

Innovation could be seen mostly at the edge. I attended the Mobile premier awards (MPA) masterminded by Rudy de Waele where 11 out of 49 start-up nominees were awarded prizes by the 500-audience and official judges. Layar won two awards for their augmented reality platform, Taxipal and PercentMobile won awards from the MoMo community and audience respectively. At the Fira, I spent some time in Hall 7 was re-named App Planet, featuring a start-up App Garage and developer workshops. I supported there a HP Labs project Friendlee nominated for an RCS innovation award. The start-up meeting from Finland and Israel organized by FinnMob and IMA was great. At the forefront of user experiences, augmented reality was demonstrated by 20 start-ups at a showcase organized by Vodafone, and PEREY Research & Consulting. VCs were attending these applications events including Accel Partners (check Rich Wong's pres at MPA) , Endeavour vision, Bluenove, Blumberg Capital, Sofinova Ventures . One VC advised on applications in adjacent industries : "these opportunities will exceed those of LTE infrastructure; find them by following your passion". This view is reflected in the drop of VC investment in traditional telecoms in 2009 : $1.6 billion, down 33% from 2008 and only peanuts were served at start-up parties ;-) 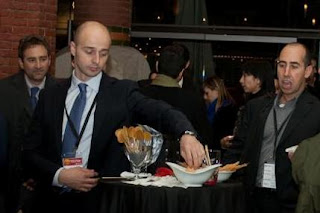 On the operator side, 24 of GSMA members anounced the Wholesale Applications Community (WAC), an open industry platform for mobile app developers to reach a market of 3 billion subscribers. They endorsed standards from the The Joint Innovation Lab (JIL) group created by Asian operators in 2008 including SDK, widgets and BONDI . On the vendor side, Sony Ericsson announced their creation platform for facilitating user generated content.

Google CEO Eric Schmidt’s keynote, - timidly read from a script as is if uncertain how to address legacy telco audiences- emphasized “Mobile First” strategy, featuring Flash and speech recognition : "the job here is to create magic" . 60,000 handsets running Android system are shipping/day (20 million this year). One Android device I previewed with Allen Prohitis is HP's Airlife 100 smartbook anouncing a 10" touch screen, Qualcomm's Snapdragon-3G chipset and 12 hours battery - interesting departure from Win7 within the HP Mini family. HTC announced 2 Android handsets : the HTC Legend and HTC Desire.
What was the industry reaction ? Nokia's CEO Olli-Pekka Kallasvuo responded with a partnership with Intel to release Meego, the union of 2 Linux platforms – Intel’s Moblin and Nokia’s Maemo . OPK modestly stating "the MeeGo platform is set to revolutionize computing" but you will have to wait : a baseline in March for Intel Atom and N900 but other devices later in the year. 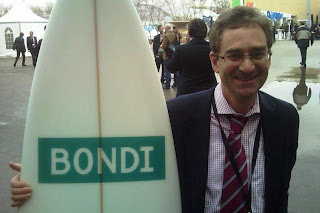 Which wave should a developer surf on, in the Android, Chrome, Maemo, Windows ocean ? Symbian Foundation just launched Symbian^3 an open source platform and a developer forum. And Microsoft announced its Windows Phone 7, a complete new release. Chip vendors such as ARM, Qualcomm, TI will also edge their alliance bets. I am a fan of BONDI, a smaller initiative for the mobile web which aims at reducing mobile browser fragmentation by releasing W3C-compliant widget APIs as the application run-time for mobile devices. They released version 1.1 at MWC on a number of different O/S including Android. And Opera announced Mini 5 beta is support to Android, complete with newest features that had been late to arrive.

Rich communications in the cloud ?

Informa ‘s rich communications conference was held in November 2009. I joined a panel there, and participated to follow-on meetings of GSMA RCS initiative and developer challenge. My findings :
Standards are only nice-to-have features
No one disputes that interoperability made SMS successful and enabled MMS modest penetration (Graham Trickey of GSMA gave an example : "MMS had 50% growth in USA since interoperability agreements in 2008". The challenge is that since the iPhone launch, and Web.20 web solutions, there is not much demand for applications with limited feature set, coming late. Even in emerging markets, users are impatient and tech-savy. So what is the status of telecom industry standard initiatives :
Cool applications : innovation and standards
What makes me optimistic is that the applications coming out are nice. There after all may be a smoother transition from telecom 1.0 industry standards to meet mobile Web 2.0 . Here are some examples :
Usage of devices and social applications
What trends will influence the evolution of these services ?

Blue Ocean strategies in telecom from around the world 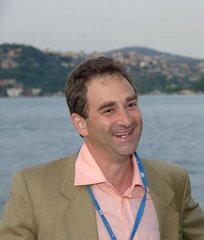 The content, information and opinions shared on this blog are mine and do not reflect information from my current customers. Claude Florin. claude@florin.ch

Leave me a video message on http://hpgabble.com Recent activity :